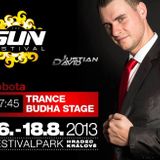 Never miss another
show from davidjustian

David Justian (initials D.J), was born 1988 and comes from Central Bohemia. Since his little childhood he was educated at music and took private piano lessons. Around 1997, he began to feel dance music when he by chance participated the local event in Netherlands. Afterthat he started to be concerned and keen about dance music, as far as by the end of 2000 he sailed in music industry himself and started to work on creating his own production. Let´s say, from the really start, it was more commercial music. As he was bored after certain time he fell for underground. In his sets we can find deep trance sounds, from house, electro to progressive style.