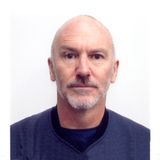 David Blamey is a London-based artist and proprietor of the independent publishing imprint Open Editions. His work encompasses several activities, including teaching, publishing, and exhibiting, which overlap to form a multidimensional practice that defies easy categorisation. To this end, his work is positioned consciously within a range of public situations, both inside and beyond the art gallery. He recently released an edited book 'Specialism' (2016) and a record 'Rural' (2015) and The Wire described his 'O.K.' sound project for My Dance the Skull’s Voice Studies series as ‘something quite strange, creepy and good’.