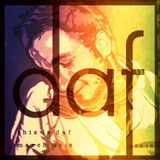 Support DAF MUSIC by subscribing directly to this channel and get access to exclusive rewards.

When the music calls, sometimes you just have to stop and listen.
Which is exactly, what David-Alexandre Fain did, when he gave up an illustrious career in law to follow his passion. The Parisian born and raised, dj daf as he is affectionately known, discovered his penchant for house music in his early teens. Constantly looking for new sounds, while carefully curating a collection of vinyls that amassed an extensive musical repertoire. Saving up to buy his first turntables at the tender age of 15. It wasn’t until his studies in law school at The University of Paris, where he moonlighted as a dishwasher at Hotel Costes- that one fateful night would give him his big break, to replace the resident DJ that called in sick. With no headphones, and dishpan hands, he amazed the crowd and received his own Costes residency at Le Paris, Le Rival and Le Tourville.
daf continued to earn accolades as a DJ in his five years as a lawyer, where he gained the attention of some of Paris’s most