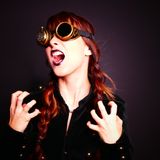 Chile, 1997... The electronic scene is growing with underground parties and raves. In this atmosphere is where Daniela Haverbeck got seduced by the "music from the machines" and develops as a DJ. In 2001 she decided to buy vinyls and to learn the art of mixing records. In 2004 she decided to go to the next step and create her own tracks and in 2006 she released her first vinyl. Together with her music production came the first European tour which contemplated a few parties in Holland. Then everything went quite fast: Schranz was a popular style, ruled by men, so Daniela's mixing skills, powerful beats and latin blood were easily noticed. This is how she got booked for festivals likes Mysteryland, Defqon1 and Decibel Outdoor. Her HardTechno tracks can be found in Mental Torments, AudioCode and Cannibal Society Records. In 2009 she created her project Rapunzel to explore House and Techno (releases with Naked Lunch, Tech Head, Gobsmacked and Adult Records).