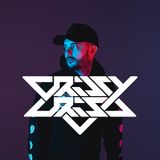 Crissy Criss has left a legacy in his wake which many of his counterparts have been unable to match. A DJ, producer and a label owner, his seminal ten-year BBC Radio 1 show put him on the map, but it’s his DJ Skill and releases which followed that have enabled him to stay ahead of the game. After becoming a weekly drum & bass tastemaker, as well as one of dance music’s most notable figures on the decks and on the radio airwaves, he’s gone on to feature across these stations although this time with his own sounds. From his imprint ‘War on Silence’, featuring BBC Radio 1 playlisted records like ‘Real’.