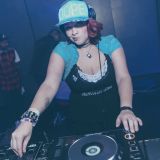 Never miss another
show from CORRINE

*ALL MIXES INCLUDE NOTHING BUT ORIGINAL EDITS BY CORRINE*

A self-proclaimed "Mad Scientist" on the decks, Corrine puts the MIX back into DJing. This East Bay native only DJs her own edits, showing no track any mercy, giving her a no BS style that will always keep you guessing & begging for more. She comes from a classically trained musical background, a punk rock past, & a sick obsession with pop culture, making her DJ sets nothing short of epic. Everything that comes out of the speakers is something funky. She's gone on tour playing Moombahton & Dubstep. Her Booty Bass & Trap music sets will put to shame even the most hardcore Bros. In House & Electro, she brings people to climax with the filthiest baselines around. Recently she found her calling when tackling the world of DnB. From Jungle 2 Jump-Up, Liquid 2 Ragga, this badass lady doesn't mess around. Whatever genre, she never hesitates 2 bring the house down. SHE IS THE REBLE WITH THE TREBLE.
corrineisadj.com