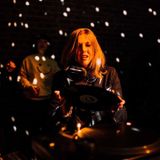 Colleen was mentored by David Mancuso at his seminal Loft parties in New York City. Together they co-produced the compilation series David Mancuso Presents The Loft and worked together on David’s record label The Loft Audiophile Library of Music. David once told Time Out "She is very devoted and very pure about the music. She's one of the only people I would trust both with the music, the equipment, and the dancefloor to fill in for me."