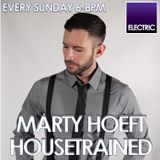 The moment I heard dance music back in the 90's, I was in Euphoria. Never had I experienced such a rush of adrenaline that made me want more. And More. And MORE.

This however, was difficult to get that satisfying sound, having grown up in a small town in New York State. It was all lumped into a category called "Techno" (which was far from accurate) and was dismissed.

Spending years being the odd one out, making dance mix tapes for anyone who would listen, I decided to give London a go in 2005

I instantly fell in love with the sounds of Funky House and Electro House, as well as the synergy between clubbers. I decided this is where Home was for me.

In 2010 I started DJing, to be able to share the many vast types of new music coming out everyday. I could not believe that I was sitting on a hotbed of music genius that most people were simply not noticing.

In 2011 I started throwing Club Nights in Kings Cross, then in Soho, to bring the love, energy, and excitement back