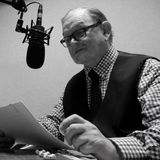 Former Cambridge 105 Radio veteran presenter Tony Barnfield's broadcasting career began on BBC Radio 1 at the age of 20 and over the following 25 years he broadcast on all BBC radio networks as announcer, presenter, interviewer and producer. Twenty years running his own New Forest restaurant with rooms followed and Tony semi-retired in 2011. From 2015 to 2021, he presented several programmes on Cambridge 105 Radio and Cambridge Talking News, where he is Editor. Awarded Gold in the 2020 Community Radio Awards as Sage Person [Over 60] of the Year.