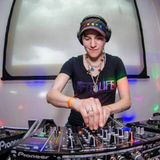 ✰✰✰✰Chananagains ✰✰✰✰Meanwhile back the lab... Chananagains was mixing up some hardcore beats. After 10 years of stomping dance floors this hardcore kid had a dream of rocking the stage. She got her start promoting and helping out behind the scenes. Soon after, she moved forward to deejaying local underground clubs playing everything from electro, breakz, fidget, dnb, and hardcore.Chananagains has made a huge impact on the rave scene. Defender of P.L.U.R. and the ol'skool beliefs of R.A.V.E, Chananagains is the raver the party deserves with her amazing track selection and her unbeatable poi skills. Chananagains will always be an all around great performer.