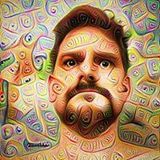 Jeezus Fuck, It's Christmas!!!
by køpperReposted

I started my life as a DJ doing high school dances in the 80s. It's hard as shit to DJ from cassettes, recognize! A two year stint on WVAU, Washington DC followed from 1988-89. In 1994 I started programming on KAOS 89.3 FM at the Evergreen State College in Olympia, Washington. I hosted a late night show called Bedbugs from 1994 until 1998 and a daytime show called Artichoke from 1997 until 2004. From 2004 to 2006, I co-hosted Free Things Are Cool with the legendary KAOS DJ and my close friend, Diana Arens. I've been silent on terrestrial radio since then aside from the occasional subbing gig for Martha Copeland's Music From The Underground KAOS show. I ran a cassette label in the 90s called Mayonnaise. Our one CD was KAOS Theory: Live on the Air in Olympia, WA which was distributed by K Records. Thanks to them for that.