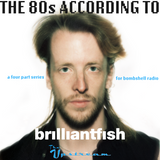 Never miss another
show from brilliantfish

Elusive, neurotic, multi-talented, stubborn, adaptable, dark, comedic, confessional, intense, paradoxical.
The man who is brilliantfish has been called many things.... brilliantfish is a musician, composer, artist and graphic designer based in Toronto, Canada. Since 1997, he has released 18 recordings ranging from post-industrial rock to minimalist trip-hop to dark pop, straight up rock and several stops in between. He is hard to pigeonhole and he wouldn't have it any other way. The work comes first.  The ADD is also a factor.
As a drummer/percussionist/vocalist, brilliantfish has worked with many diverse artists including Sleeps Six, Jonathan Seet, Priya Thomas, Sally McKay, Cadre Frank Patrick and Jim Field (Northumbria).
He is half of the duo 'Hush & Rust', who released their debut album in October 2016, and is in production on at least 4 albums of his own.
Change is the only constant...