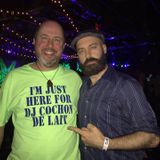 DJ Cochon de Lait's life's quest is to put every ass in motion. Don't just stand there. Get down or get the hell out the way.