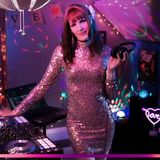 During the early 1990s Branwen Munn was one of the first students in the world to graduate with a BA(Hons) in Popular Music and Recording. Following her studies, she worked in London as a sound engineer, musician, and producer, collaborating on recordings and live events with pioneering artists including 4hero, Talvin Singh, Madonna and Lady Miss Kier. Branwen's involvement in theatre music began when she relocated to west Wales in 2002. Since then, she has created original music for a wide variety of Cardiff-based theatre work, More locally, she has contributed to community performance and film projects as director, sound designer, composer, and video projection artist. Branwen continues to record and produce music of her own and for other artists at her own GoldHill Studio in Carmarthenshire, while DJing online and in person as GoldHill Disco.