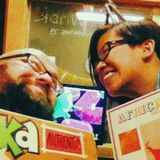 Never miss another
show from Bovine Ska and Rocksteady

Generoso's Bovine Ska & Rocksteady began in the summer of 1996 at WMBR Radio, 88.1FM in Cambridge, MA and we did our at WMBR until 2015 when we moved to Los Angeles where we now do the show here on Mixcloud. Our show focuses is early rare Jamaican music from the inception of the Jamaican recording business in the 1950s (mento) through the Jamaican R&B era, ska, rocksteady &the earliest recordings of the reggae era (1968-1972). Over the years many legendary Jamaican artists have graced the program for interviews and performances such as Laurel Aitken, Owen Gray, Lord Tanamo, Derrick Morgan, Jimmy Cliff, Toots Hibbert, and Prince Buster. In 2011, Lily Fierro became the permanent co-host of the show and she brings a wealth of knowledge to our spotlight segments.
Join our group on Facebook:
https://www.facebook.com/groups/1753217