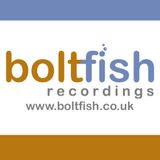 Never miss another
show from boltfishrecordings

Launched in January 2004, Boltfish Recordings is owned and run by Cheju and Mint, long time friends and musical collaborators. Their exploration into experimental sound dates back as far as the mid-1980s and they have been actively involved in music production ever since.

Boltfish is a label specialising in electronic music.

From its inception in January 2004 Boltfish released its music regularly, building an extensive catalogue, including albums, EPs and compilations, from artists across the globe. Many items have been produced in limited physical editions whilst permanently being available in digital format.