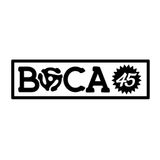 Never miss another
show from Boca 45

Forty Five is the soundtrack of a life. A revolution in sound played out in stacks of 7” singles; a long player that pulls together the numerous disparate musical strands that have made Boca 45 (aka Bristol based record selector Scott Hendy) the DJ he is today, in his forty fifth year on Planet Earth. Having previously made records for Grand Central, Jalapeño, Island and Domino, Boca 45 returns with a twelve-track album that’s semi-autobiographical and full-time firing on all cylinders.

The first single from Forty Five - Bryan Munich Theme - sounds like an incendiary lost ’70s library record; the perfect funk-flecked walk on music for a team of doughty outsiders destined to lift the cup. An extremely limited number of gold vinyl 7”s have been made in conjunction with Bristol Beer Factory to tie in with the launch of a Boca 45 amber ale (as part of the BBF Vinyl Series).