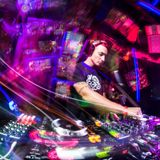 Never miss another
show from Blaazny_

Blaazny, known as Klemen Blažič is a DJ and one of the founding members of Universe crew (Društvo Universe) who brought psychedelic scene in Velenje, Slovenia.
After first contact with psytrance in 2012 he started exploring all kinds of psychedelic music and culture, attended numerous parties, festivals and rooted deep into psychedelic scene. Soon after he began collecting tracks and decided to became DJ. His performance is the easiest to describe with two words dark and gangsta. Until now he
accumulated mileage of performances in Slovenia and also in Croatia.