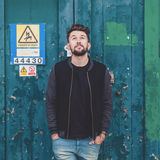 For many, Ben Pearce is a name synonymous with his breakout hit ‘What I Might Do’, a genre-spanning, deep house anthem that dominated club floors across the world in 2012, and shot to number one in the all-genre charts on Beatport and is still in the Shazam top twenty one year later. This brought instant support from the likes of Jamie Jones, Solomun, Pete Tong and Annie Mac who played the track repeatedly on BBC Radio One and the track went on to go Platinum in mainland Europe.
However Ben is anything but a one-hit-wonder. A hugely talented underground DJ first-and-foremost who's ability to work with a range of musical genres have propelled him into clubs such as Sub Club, In:Motion, Warehouse Project, Shine, Air, Kassette, Fabric and to festivals such as Glastonbury, Hideout, Pukkelpop and Parklife Festival in his native Manchester.