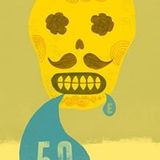 Ben Men was a co-founder and manager of record stores Statik and Basement Trax Records from 1996 to 2002.