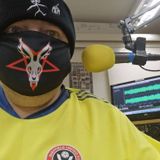 Never miss another
show from belch1889

Adrian was a newcomer to broadcasting but has been an avid listener of radio all his life. Born and brought up in Sheffield, he now lives in Stanwell having arrived here via stints in Northants and the EastEnd of London. After 30 years in retail he is now doing voluntary work for Mind Matters, the mental health arm of Surrey and Borders Partnership NHS Trust in order to give something back to an organisation who helped him so much.
Adrian is a passionate football fan with a love for Sheffield United that knows very few bounds, and has a compulsion for record collecting that veers into the obsessive. He also claims to be The Greatest Hitchhiker In The World having toiled up and down the UK motorway network regularly since 1984, writing two books along the way, Fever Hitch (2001) and Aylesbury Bolton Wolverhampton Hove: A Little Man And 101 Cardiacs Gigs (2011). The Progressive Alternative reflects his love of Progressive Rock and an eclectic mix of alternative and underground sounds.