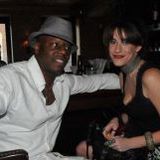 Well, I don't know what I've been waiting for, but I know that I don't want to wait anymore. - BB

Becca Lane brings great creativity and tireless energy to the vast realm of communications. During two and a half years spent in New York City at V2 Records, an offshoot of Virgin Records, Lane worked in various capacities. As National Tour Publicist, she coordinated all tour press for V2 Records and Luaka Bop bands (a subsidiary of V2, owned by Talking Heads bandleader, David Byrne).

Once returning to Philadelphia, as an account associate for a local PR firm, Lane single-handedly launched a new Social/Multimedia Division. As of January of this year, Lane has now shifted her focus towards pursuing independent projects that are geared more toward the arts (specifically music) and social/multimedia through the launch of her own firm, Becca Lane Media, LLC.

Lane has additionally contributed as a writer for various publications including SPIN, NYLON, The Temple News, and the local Phi