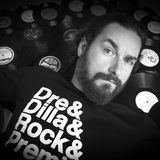 Never miss another
show from beatmasterwright

Base Breakfast with Ian Beatmaster Wright (13th June 2022)
by beatmasterwright

Base Breakfast (11 May 2022) - Take it to the Streets - Silas Futura & Latinaotearoa LIVE!
by beatmasterwright

Base FM's Breakfast host Ian ‘Beatmaster’ Wright has been a hip hop, funk and breaks DJ for over 25 years. Originally from the south of England, Beatmaster relocated to Auckland, New Zealand in 2012. Back in the UK he was part of the ‘Off The Hook’ Sound System, ‘Good Bye Cruel World’ and ‘BUSH’ club nights where he supported such acts as Souls Of Mischief, Ugly Duckling, People Under The Stairs, Jeru Da Damaja, Rahzel, Andy Smith, DJ skully, Mr Thing, DJ Noize, First Rate, and 3x DMC World Team Champs C2C to name but a few. Beatmaster continues to rock parties in and around New Zealand with a blend of funky Hip Hop, soul, breaks & mashups.