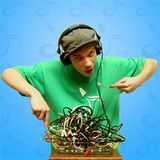 Never miss another
show from Beast

Beast got in touch with classical music at a very early age, thanks to his father being a music teacher.
In 2002 he becomes the leader of the school radio and is activating as dj and event organizer. He has mixed several genres of music from hip-hop, club, garage to folk, balkan, acid jazz... until he suddenly found himself trapped in the world of broken beats.
His style is strongly based on breakbeat music, his sets are melodic, improvised at the spot, full of lively vocals. He has interest for the art of turntablism and he believes that music is capable of a communication beyond words.
He is founder and active member of the Tone Troopers Audio Visual Association, which makes it possible to organise various subcultural events in Saint George city… He performed at the major locations and festivals in Romania but he also showed his talent abroad.