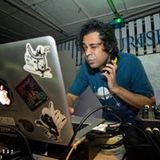 Binary Fusion #18 with Menja Mist on Di.Fm/Techno 10-8-18
by Menja Mist aka AngelingaReposted

Calm Chor is the Alter ego of Ashvin Mani Sharma who has been a part of the Indian underground music scene since 1995. He has been producing music and deejaying since 1998, and is one of the co-founders of Jalebee Cartel, a live electronic music act that has put India on the international EDM map delivering power-packed performances from Paradiso in Amsterdam to Blue Frog in Mumbai.As a solo act he is much in demand becuase of his versatility to adapt musically to any situation. He also makes music under the name of Crash & Boom which is a Psy-Trance Project with Ash Roy and has also partnered with him on Soup Herb Records , a new label for groovy dance music .

Calm Chor is here to steal your calm. "Calm" in this context is the safe yet, ...