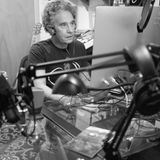 Beginning in January 2018 Mostly Folk will be broadcasting only once a week and in addition to Mixcloud, will air on a number of internet stations. radiosatellite.co, bluesandrootsradio.com as well as bluegrassplanetradio.com. Mostly Folk remains a part of my regular broadcasting, but I have now joined the incredible team of bluesandrootsradio.com with a new show called "Power Folk" which will air on their internet radio broadcast at 1pm every Sunday live and archived at powerfolk.org. In both shows I will cover newly released albums and classic folk and bluegrass music as well as some traditional music that may or may not be true to the genre. Sometimes irreverent, often opinionated but always entertaining. You may even hear a radio "magic trick" every so often well as numerous interviews live and via telephone with established as well as indie artists. In addition, I am broadcasting live on WIOX 91.3 FM and streaming at wioxradio.org Sunday from 2-4pm EST