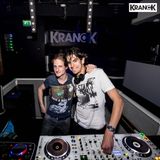 Bio
Aquinox, aka John Akerman Özgüç is a Dutch-Turkish musician from Utrecht. His passion for music was ignited at a young age, and grew until listening to music wasn’t enough anymore. Wanting to shape and craft music to his own ideals, he turned to established DJ’s and producers for inspiration and guidance.

His passion and energy led to many gigs, also in France, Spain, Turkey and Russia, where he performed on private, business, and commercial events. The thrill of the special type of connection with the crowd, only achieved by means of musical energy is what keeps him going.
The name Aquinox is derived from the equinox, meaning equal nights in Latin, which is an astrological happening exactly between the longest and shortest days of the year, happening on his birthday.
Besides manning the wheels of steel,Aquinox composes his own music
Aquinox’ style bears resemblance to artists such as Worakls, Prunk and Oliver Weiter. His style is defined by energetic and moving melodies.