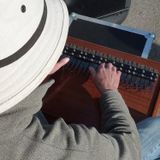 Tom Green is a contributor/co-writer on five albums by The Orb, including the seminal "Adventures Beyond the Ultraworld" and number one album "UFOrb", and performer at the Big Chill 1994-2010. As 'Another Fine Day' he created the ambient classic "Life Before Land" in 1994 (voted No 3 in the The Independent's "Greatest Ambient Albums" chart) and the sophomore "Salvage" in 2000 (Billboard noting that it "sounds like a Parisian cafe in outer space") He has also remixed or co- produced many artists from Natacha Atlas to Baka Beyond.

At the same time he's been wearing a different hat as a media composer, commissions ranging from BBC documentaries to comedy horror feature films, and at the other end of the spectrum, music for MRI Scanners (for the Royal Infirmary, Bristol) … as well as a considerable amount of library music.