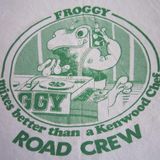 Never miss another
show from Andybella

FROGGY LIVE AT LORDS FRIDAY 7th MAY 1982
by Andybella

FROGGY LIVE AT FLAMINGOS THURSDAY 7th MAY 1981
by Andybella

Roadie for the Original Funkmaster FROGGY & The Funk Mafia DJ's. I started Roadieing for Froggy around 1977 at Ilford Town Hall Junior Disco on Monday nights in Ilford London after being introduced by my school friend Craig Morris. After about six months Froggy asked if i would help out at one of his regular over 18 nights at the Royalty North London which was a Jazzfunk & Soul night. He would have guest Djs also playing there including Chris Hill Robbie Vincent Greg Edwards Jeff Young Sean French Chris Brown Tom Holland Dr Bob Jones Pete Tong Martin Collins Mick Clark,along with live PA,s from visiting artists from America & England promoting there latest releases. Was also responsible for the sounsystem at the early Caister Soul Weekenders,Alldayers & National Soul Day in the late 70s & 80s. Also we would do many of the Radio 1 roadshows and regularly tour with the DLT roadshow. Over the years i recorded many of the shows on tape cassettes which i now convert to digital.