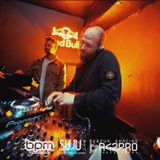 Andy Canguelo started behind the decks at the age of 17 and in 2001 he started playing at one of the most well known clubs in the Southwest of England "The Brunel Rooms" he played the most up to date commercial dance but gradually turned to the music he truly loves... Funky Progressivde House, Disco and Techy Latin Sounds!
Andy’s name was getting around in the Swindon club scene and started a residency on the well known frisky! Night in the well known club in the UK Brunel rooms and was playing along all time greats like Craig Bartlett from l’America and continued until it closed
With his succession playing at the Brunel rooms he moved his residency at soda night club and continued to smash the dance floors to be recognised to play residency on the well known Hed kandi playing with mark Doyle, David Dunne, matt Collins and many more.
With his successful times Andy has played at the well known ‘Invincible’ festival and had the pleasure to play alongside Zane Lowe, Stanton Warriors