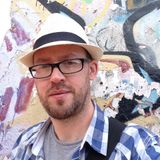 Here are all the episodes of Electric Sheep, a radio show loosely themed around the history of the synthesizer. The show was broadcast on Oi FM, Joensuu's splendidly nonconformist community radio station, every week until the station closed in early 2015. I played assorted analogue-synth-inspired records from down the back of the sofa, I talked a lot of nonsense in between, and more often than not I failed to work the equipment properly and caused strange noises. Electric Sheep won the Oi FM programme of the year award in 2014.