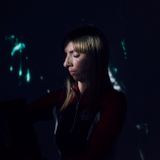 Ana Quiroga is a London based music composer/producer and sound designer, working across arts, film, audiovisual and interactive media.

She has performed at renowned events and festivals including Barbican London, Berlin Atonal, Sónar Festival, MUTEK and Corsica Studios among others.

Ana was half of LCC who released two albums on Editions Mego. And she also has produced music under the alias of NWRMNTC.