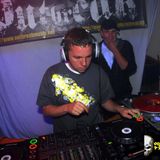 Never miss another
show from amok

Amok - To move about in a violent or frenzied manner.

Amok took a turn into the world of electronic music in 1999 with the introduction of drum n bass & jungle to him by a friend. In 2001, He and a couple friends bought a pair of belt drive turntables and a 2 channel mixer and began learning how to spin dubplates..Later that year, he played his first gig out in the public at the Old Tracks dnb fridays on the patio in Denver, and then began playing at a weekly at Tarantula Billiards on Sundays. Finding this niche in production spun off a whole new world. In 2006/07 with the EDM scene on the rise again in Colorado, it was time to return to spinning records and converted to cds playing electro breaks and indy electro, new genres with the filthy synths and basslines that were bring rise to the ears of so many. In late 2008, Amok found the genre, Dubstep and was sold ever since.