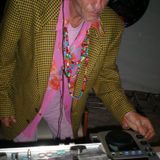 I've been a Chill Out DJ for over 30 yrs i have no style or flavour it's just mainly any flavour that bends my ears..if i had to pick one Album that got me ending up here it would be Enigma MCMXC AD an album that changed my life in so many ways ..it was a must listen at the after chill at a good friends house in the day of the Doves/Disco Biscuits and Acid House parties in Blackburn and Blackpool..A veteran of the outdoor party scene in Lancashire, Cumbria and Scottish Borders with over 30yrs spent as a DJ and avid vinyl collector. ..i was resident Chill Out DJ for the Sonic Boom nights in Bradford a three floor venue with the Chill Out /Music Cafe on the top floor called the "Bionic Fish Boutique" Four years ago i was given the opportunity to take over the Chill Out Tent from Michael Dog's "Dog's in Space" at Solfest in Cumbria i challenge i took and set about changing it into the now Legendary "Loungevity" a space and a creation from my mind i am extremely proud of!!