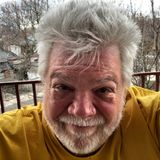 Never miss another
show from a man called wrycraft

Bio: Over the last 29 years Michael Wrycraft aka A Man Called Wrycraft, a graphic designer who specializes in music, has designed somewhere around 700 album packages for a virtual who’s who of the International Folk, Roots, Blues & Singer-Songwriter world. Along the way, he has collected five Juno Nominations, and one Juno Award as well as numerous American and Regional Awards. His first (of 8) album designs for Bruce Cockburn spent a year on exhibit in MoMa (The Museum Of Modern Art) in New York City. Massey Hall in Toronto has Michael design posters for very special concerts. You probably own an album or poster designed by Michael. In addition he's sung background vocals on 15 popular recordings, executive produced 3 critically-acclaimed albums and has emceed the Main Stage at countless Folk & Music Festivals right across Canada as well as been Curator, Producer, Promoter and Emcee of over 75 live multi-artist concerts at Hugh’s RoomLive in Toronto and on tour. wrycraft.com