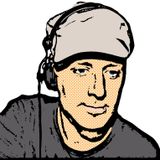 Never miss another
show from Ali B

Ali B - Oh Shit! (Commonwealth)
by Ali B

With an eclectic and varied music industry background spanning nearly two decades, Ali B has a broad sense of musical appreciation, coupled with an intuitive feel for the dance-floor which has seen him hold down DJ residencies at some of London’s most influential venues. After making his mark at the legendary Blue Note club, he then went on to become the resident DJ for Fabric for over a decade, releasing one of the first albums in their mix CD series. He has spent the last few years hosting Saturday nights at West London’s ‘Paradise’ where his legendary 5 hour sets seamlessly take in everything from blues and funk to rock, soul, dub, disco and beyond, captured on his ever popular series of ‘Oh Shit!’ mix tapes and ‘Airpod’ podcasts. He has also extensively toured Europe, Australia, New Zealand, Canada, Asia, Africa and the US.

Find out more at www.airrecordings.com