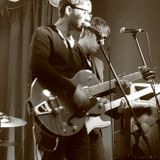 Never miss another
show from alexstarling

Getting compared to a one man Lennon/McCartney wouldn't be such a bad thing by anyone's standards - but the problem is this: Alex Starling's knack with grand melodies, dramatic lyrics and cinematic vision is merely the tip of a massive, musical iceberg.

Anyone familiar with electro-rockers Ou Est Le Swimming Pool will be aware they're one of the hippest bands for critics to tip-off for 2010. Anyone really familiar with them will know that Alex is up there on stage with them every night - blasting out the euphoric keyboard lines.

When he's not performing with Ou Est , Alex is stirring up a whirlpool of his own as a solo songwriter. The legendary Tony Christie has sung one of his songs and Alex has also recorded an EP with the genius behind Spiritualised's masterpiece, Ladies and Gentlemen we are Floating in Space - producer Darren Allison.

Hold it with the name dropping though - because this time there's no need. Alex Starling's live shows speak for themselves.