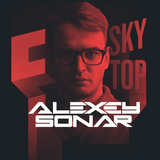 Alexey Sonar - is one of the most ideological and active representatives of the Russian club industry, a DJ, a producer, a co-owner and a manager of the labels Intricate Records and SkyTop, the host of the weekly radioshow "SkyTop", and in the past his well known worldwide radioshow «Asphalt» had been broadcasting for 10 years on the Internet and on FM radiostations in several countries. Today, his name is consistently in the top 5 rank as one of the best progressive house, melodic house & techno DJs in Russia.

As an artist, he regularly takes part in major music events in Russia, including Kazantip, Epizode, and actively travels with performances in Russia and around the world, whether it is the legendary London club Ministry of Sound, Europe or Exotic India, South Africa and Vietnam.