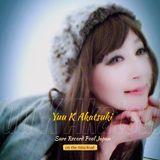 Support Yuu K Akatsuki by subscribing directly to this channel and get access to exclusive rewards.

and gradually became a DJ and incorporated the melodic vibe into her sets thus proving her signature style which would bring utter madness on the floor combined with nostalgia in the minds of the crowd that they would relish together with the spirit of the top class quality sound every time she has her hands on the console. Defining her style one could get the taste of her magic from her first EP “MESSAGE” and it turned out to be so fantastic that her track “CRYSTAL CODE” feat. DETTECT got chosen by BANG IT ! Records and saw it’s release on “ADE 2016 Sampler”. Also showed up on Zibiria Records and Urban Records.His official inclusion on "DJane Mag" has made a double impact on fans all over the world. He has also been featured on Waves Radio,Ruckus Radio with some of the world's top DJs, XDPromotions!!