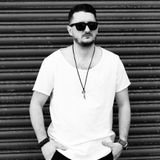 Dublin based and originally from Romania, Adrian Bilt has had a passion and a love for music from a very young age. Inspired by his brother who was enjoying listening music on a Reel-to-Reel Tape Recorders, Adrian Bilt discovered step by step a new hobby wich later on became a passion for playing music on private parties for his friends.
In the next few years he learned the first mixing techniques and after many years behind decks being a rezident Dj at various clubs and venues such as: R CLUB, CLUB M, ENERGY CLUB, MEDIO-MONTE CLUB, CUBA CAFE & CLUB, GREEN PUB, ATHOS CLUB, one of the most well-known clubs in Romania, where he had the change to play alongside: Audiofly, Dj Puskarev, Dj Alex Kenji, Tommy Boy, Dj Sterbinszky, Livio & Roby, Dj Optick, , Pagal, Adrian Eftimie, Mahony, Dj Jasc & Dj Carlos, Vali Barbulescu.
After that it was time for his Dj’ng career to take a next step and he moved to Dublin where he continued his Dj career starting to produce music.