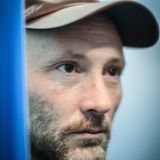 Never miss another
show from POL

the dark backstages of the post-industrial civilisation, POL infiltrates his music into our world by every mean. At the decks or performing live, we follow his footprints from the techno underworld of Geneva to the clubs of the planet (Paris, Barcelona, Berlin, New York, Moscow, Lisbon, Bogota, Tokyo, Delhi…).

Among his recent works one shall notice DRUMMING BY NUMBERS, a revisitation of Steve Reich for percussion quatuor or JJRMX, an adaptation of scores by Jean-Jacques Rousseau.

He creates sonic installations like the interactive zen garden TACTILE.

Today, he pursues his conquest of space as a solo pilot or with the help of co-pilots in the projects ROBOR (electronic improvisations) with Ghostape, AEROFLOT (experimental-electro-pop influenced by Atoms For Peace and Tom Yorke) with Goodbye Ivan or SUNISIT (IDM) with Cesare Pizzi, founder and keyboard of the famous Young Gods.