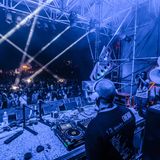 Zed Bias Presents : It's a Percy!! Volume 1
by Zed Bias

Zed Bias is an English electronic musician, both a producer and a DJ he is considered one of the biggest pioneers of breakbeat garage.
UKG stalwart, broken beat fanatic, dub connoisseur. His pseudonyms include Zed Bias, Phuturistix, Funk Bias, Daluq, Talissman, Ruffcut Bias, Nu Design, 7 Wonders, Almighty Beatfreakz, Dekata Project – just some of the names Maddslinky, aka Dave Jones, has recorded under in the last 14 years as himself or in collaboration with others.

With a slew of seminal releases in 1999 on his own Sidewinder and Sidestepper imprints, Jones then hit the UK Charts as Zed Bias in 2000 with Neighbourhood, now widely regarded as one of the all time classic UK Garage tracks.

Here are some great 60 minute mixes from Zed's BBC 1Xtra residency with MistaJam.