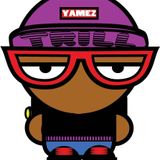 R&B ME
by Dj Yamez

Dj/Producer/Skater Frm Brooklyn Instgram @djyamez
Dj Yamez began his dynamic career in Pittsburgh and in 2004 burst on the New York scene; since then he has wasted no time becoming a reputable figure in the music industry. His name garners attention and respect not only in New York but throughout the country!!