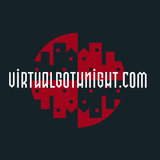 DJ Arricc/VirtualGothNight's take on the Goth music scene is a broad sweep across all of the Gothic sub genres and all of the eras from the early days up to tracks released that day. With a headline focus of Goth/Industrial/EBM/Alternative, expect to hear many of the big name artists, and several less known acts - including some that weren't previously well-known outside of Scotland.

On Sunday afternoons, REMEDY has a similar scope to Fridays VGN - but with a focus on lower tempo and relaxed tunes. POISON on a Tuesday evening has a pure Alternative remit. It's that alternative club from the 90s/00s - the one that Arricc used to go to.