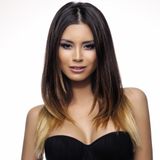 Victoria Kern is an international female DJ, singer, model and actress. She is best known for her appearances in a variety of hit-breaking music videos on TV and YouTube.

Victoria stared to work as a model in her early youth and later got in contact with the music business when she performed as a dancer at festivals and events like Sensation White. A video director asked her to perform in a music video of chart breaking act R.I.O. and shortly after release of the video it outperformed all expectations. Until today the video of “R.I.O. feat. Nicco – Party Shaker” is one of the most viewed dance videos of all times reaching 190 Million views on YouTube.

At the same time Victoria met DJ duo Bodybangers who asked her to perform vocals on a track they were producing together with DJ Klaas in the studio. Victoria who had never worked as a singer before considered this opportunity exciting. The result was outstanding and a short time afterwards the track “Klaas & Bodybangers – I Like” t