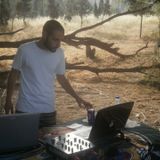 After getting bored of thrash metal in 2006, I started exploring other atmospheres, more relaxed ones, I can say. Some reggae and chilled vibes, blended with a little bit of nitzhonot/uplifting and Goa trance, led me to get to know modern psy-trance. In 2010 and 2011 I started organizing small parties and gatherings with friends at Greek universities. In 2012 the team Acid Sound Waves was formed, in which I took part, and realized some open-air gatherings in Athens. Since then I get to play here and there, presenting the music that I enjoy and sharing it with the people.