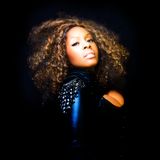 Ultra Naté : Pearls Of Wisdom
by The Voice Of Cassandre MixtapeReposted

I am Ultra Naté. I am based in Baltimore as a singer, songwriter, DJ, producer and promoter. I have released 9 studio LPs [1990-2018] and travel around the globe performing and spinning live for a variety of audiences. I've been writing my own songs since the beginning of my career. I was one of the first artists in house/dance music signed to a major record deal with Warner Brothers in the UK in 1989 and I have more than 25 years of experience making groundbreaking music having collaborated with a wide array of artists such as: The Basement Boys, Nellee Hooper, D-Influence, Mood II Swing, Nona Hendryx, Lenny Kravitz, N'Dea Davenport, DJ Class, NERVO, Tony Moran, StoneBridge, Todd Terry, David Morales, Michele Williams (of Destiny's Child), Boy George, 4 Hero, Morgan Page, Quentin Harris and others! My sound embraces a variety of genres - it's all about the music! I am honored to be considered an icon of the Dance & LGBTQ communities worldwide.