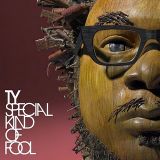 Never miss another
show from Ty

As one of the most revolutionary rappers on the British hip-hop scene, Ty embodies the intellect, talent and ferocity of an MC always destined to become a legend. Over the last decade, the Mercury Prize nominee has achieved the rare feat of establishing a legacy through his three albums and wise persona, strengthened by his amazing worldwide shows and countless appearances alongside luminaries such as De La Soul, Tony Allen and Pee Wee Ellis. Musically, he's also worked with Estelle, Scratch Perverts, Talib Kweli, Black Twang, Arrested Development, Bahamadia and Zion I, both in front and behind the mixing desk, further proof of his relentless artistry and his evolution from roguish wordsmith from South London to an internationally-acclaimed hip-hop connoisseur.