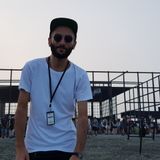 Jimmy Esebua young Georgian DJ and Producer is the creator of projects Trunembra and Querubim. He actively started playing electronic music since 2016 and nowadays he play in many famous clubs and festivals.
The main feature of Trunembra's music centers around hypnotic and dark techno vibes. He also works with Ambient and Dub Techno Musical directions.
His music had a great influence from artists such as : Robert Hood, Derrick May, Kevin Sounderson, Oscar Mullero, Fiedel, Adam x, Jeff Mills, Ancient Methods and Vril. Also huge role had Detroit an Berlin electronic music scene culture.
The idea of creating both of musical projects was inspirated of a special interest and love of vinyls . In a very short time, he managed to collect quite a rich collection.
At the same time he actively works on producing and house music project, which, in a short time brought to artist great success and popularity.
Trunembra is composed of living noise and to summon a cacophony of horror and fear wit