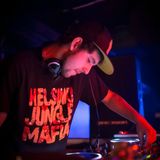 Never miss another
show from Trey

Trey's been actively collecting vinyl from 2005 and djing in Finland since 2011. He quickly hooked up with a Helsinki-based sound system / dj collective called Ivah Sound and started to do regular tuesdays at Iso Roba 10.
In 2012 Trey joined Helsinki Jungle Mafia ranks and is a regular there. His style leans heavily to the old-school vibes and he prefers to play Jungle, Oldschool and Jump Up influenced Drum & Bass tunes.